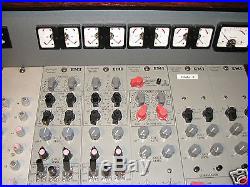 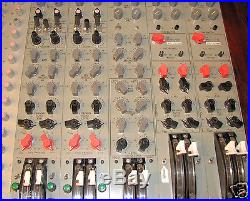 Vintage EMI TG12345 MKIII Side Car. The EMI TG12345 MKIII Side Car in my studio. The EMI TG12345 MKIII Side car has the following configuration. Every input and output appears on the back of the unit as well as the patchbay. The patchbay is a 1 space TT to ELCO external unit. (included are the patchbay and three 15′ Mogami cables) Looking at the console from left to right it has the following “Cassettes” (stereo modules) EMI TG12345 MKIII Side Car specs are as follows- From left to right — 16X2 Summing cassette made by EMI for EMI’s Studio in the Netherlands , This is were the TG12345 MKIII that I own came from. This 16X2 summing cassette has 16 line inputs with pan and volume control , to a stereo direct out or to the Master Stereo 2 buss (EMI Main 1 Cassette- far right) This Cassette also has balanced CUE sends out , receiving the cue buss from the cassettes with cue sends. (each channel of each Cassette has 2 cues send) Next are the 2-Mic Cassettes (all Cassettes are stereo) Mic or line inputs can go into this cassette. The EMI standard in 1969 was 0db at 200 ohms output for a. In 1972 EMI manufactured booster amplifier assemblies in card cages that brought the output up to +4db at 600 ohms , with monster EMI custom output transformers. These amplifier card cages were used to drive the output to industry standard +4db 600 ohm on the outputs and at the inserts. The card cage that can be seen in the front under the cassettes are these assemblies. We have added these to the direct out of the 4 mic preamp channels at either the mic pre out, insert send, and (switchable) to the direct out of the entire channel (Mic Pre/ Compressor/ EQ -post fader) Each of the 4 Mic Cassettes can also be bussed to the Main Stereo out Cassette , which also has an +4db output cards. (the direct outputs are always active even when sending to the stereo buss) It is possible to track with just the mic pre section of the Mic Pre cassette and bring line inputs to the insert return, sending the signal to the compressor and EQ on the Mic Cassette to the direct outs or to either of the Main Cassettes, Main 1 or 2. Main 1 is the Stereo 2 buss out. Tracking through the complete Mic Cassette (mic pre/compressor/eq) can be sent direct out (+4db) and simultaneously to the Main Cassette Stereo 2 buss out. There are 2 cue sends (next to the faders) that are available to the real world through the Summing Cassette. The next Cassette is the Echo Cassette , this cassette received echo sends from the various cassettes (on the echo buss) and EQ is available on both the echo send and echo return section of this Cassette. Added are EMI Transformers for line inputs from the real world. These inputs can be bussed to either Main output cassette or stand alone as direct outs. The Echo Cassette also has a separate echo Return section with EQ that brings signals back into the cassette.. This is now set up to bring line inputs into the cassette with EQ and buss to either of the Main Cassettes as well as direct outs. There are direct outputs available at +4db. This gives the side car 4 stand alone EQs or 4 bussed EQ line inputs to the Stereo 2 buss. The Echo Cassettes are now balanced in and out. 4 EQ line inputs. The next 2 Cassettes are the Main Cassettes. The Main Cassettes were used in the console as record outputs and replay inputs. (to and from tape) This Main Cassette is used as a extra pair of buss outputs and 4 line inputs with inserts. The replay inputs are bussed to the Stereo record outputs of Cassette Main 1 stereo buss out. EQs , Compressors ect can be inserted into these Main Cassette and put on the Stereo Buss There is also Pan and Cue sends on the Main Cassettes. There are separate level controls for the Stereo Record out (faders) and level controls for the replay in (rotary knobs) All signals are on XLRs on the back of the side car and the side car can operate totally stand alone. All of the signals that appear on the back of the side car also appear on 90pin Elcos and are brought out to a 96 point tt patchbay. There are a total of 28 inputs available to the 2X2 buss. (using the 16 channel summing buss) Without the use of the summing cassette there are 4 channels of micpres, EQs and compressors, 4 line inputs with EQ and 4 line inputs with inserts, panning and cue sends. 12X2X2 plus with 16X2 summing cassette bussed to the 2 buss there are a total of 28X2X2. The side car comes with copies of the original documentation and all notes explaining hookup and wiring. The EMI Logo on the side car lights up red when the side car is powered up. Please no low ball offer s as they will be automatically declined. If you have questions I will try to answer them. The item “EMI TG12345 MKIII Vintage Console Side Car Mixer all Original Parts & Modules” is in sale since Thursday, June 23, 2016. This item is in the category “Musical Instruments & Gear\Pro Audio Equipment\Vintage Pro Audio Equipment”. The seller is “cqdx4u” and is located in Umatilla, Florida. This item can’t be shipped, the buyer must pick up the item.